Dr. Tom Hunter has been the pastor of Emmanuel Baptist Church for the last seven years.  Pastor Hunter, as he prefers to be called, was born and raised in Ohio.  He was saved at an early age at an old fashion revival meeting.  He grew up in the First Baptist Church of Milford, Ohio under the ministry of Dr. Charles Keen.  At the young age of 18 he joined the United States Army and was soon sent to Viet Nam as an infantryman.  Having survived the battlefield he knew God had something special planned for his life.  When he came home he surrendered his life to the Lord and the Lord called him to preach.  He attended Midwestern Baptist College under the leadership of Dr. Tom Malone. Upon graduation from college Pastor Hunter and his wife Carylon started a church in Flagstaff, Arizona.  He has since pastored two other churches, his last being for twenty-three years at Bible Baptist Church in Central Lake, Michigan.

Pastor Hunter and Carylon have been married for 43 years and have four children.  Both their sons are pastors and their daughter Amy is married to a wonderful preacher.  Their youngest daughter, Tiffany, is married to a fine Christian man and they serve God together in the church where her brother pastors in Port St. Lucie, Fl.

You will find when you meet Pastor Hunter that God has given him a shepherd’s heart.  He loves the Lord Jesus and His precious Word.  He also loves his people dearly.  He is there to help them spiritually, and to help them raise their children up for the Lord.  He truly has a heart for lost souls here and round the world.  Pastor Hunter believes in personal soul winning and he practices what he preaches as he is out every week trying to win souls to Christ.

Bring your King James Bible when you come to church as Pastor Hunter will bring a message straight out of God’s Word so that when you go home you will have to say that is what the Lord says not what Tom Hunter says.  He is one of the few preachers remaining that preaches against sin, and believes in repentance when it comes to salvation.  He believes that separation and holy living is necessary in order to be vessels fit for the master’s use.

You will find Pastor Hunter to be a humble and spirit filled man of God.  Come and hear him preach God’s wonderful, and holy, powerful Word. 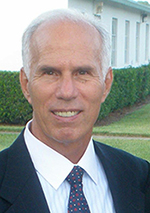